Voluntary Refusal of Food and Fluid – a Case Study 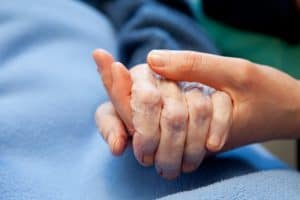 My wife suffered a stroke in April 2017 at the age of 73. She was a fit and healthy person, doing regular exercise and maintaining a healthy diet. She was a non-smoker and an occasional social drinker.

My wife was working full time as a counsellor with CASA (Centre Against Sexual Assault), had been a nurse for fifty years, and was a civil celebrant as well as being an active farmer.

As a result of the stroke, she became bedridden and was admitted to in a nursing home in Benalla. She suffered from dysphagia and was PEG-fed(1), so was unable to take any nourishment or hydration in an oral form.

As a result of her inability to swallow, she constantly had a build-up of phlegm in her throat resulting in constant coughing, the removal of sputum using tissues, and the occasional use of suction. She experienced regular bouts of pneumonia as a result of aspiration. Doctors prescribed antibiotics to manage her lung problems, which resulted in constant diarrhoea.

My wife had the use of her right hand only and was totally reliant on the nursing staff to lift her via a sling to the shower, place her in an armchair, position her in a wheelchair for outings etc.

She managed, with my assistance, to occasionally use an electronic tablet I had mounted on a boom on her hospital bedside table, and with a similar mounting could receive phone calls on her mobile phone. With extreme effort, she was occasionally able to make outgoing phone calls and attempted to send emails but her shaky right hand usually made that process exhausting.

We engaged a private physiotherapist who worked with my wife twice a week for over two years, and she set herself a goal of being able to get herself to the toilet under her own steam. That intensive treatment allowed her sit upright after being lifted to that position, a stance she was able to maintain for about thirty seconds.

My wife began to realise that, after nearly three years of continual discomfort, she wasn’t going to improve. She realised, apart from the likelihood of pneumonia ending her life, she could continue in that lifestyle for another fifteen years. What was more important, she knew I would be by her side all day every day, assisting to make her life easier. She determined that wasn’t fair to me or her family.

In November 2019, she asked me to contact Dying With Dignity Victoria, an organisation who have the expertise to offer counsel to people in her situation.

DWDV offered us the facility to talk with doctors who could assist our thinking.

She realised she had the right to cease her medication at any time of her choice. The major medication for her survival came from the PEG feed on which she was totally dependent for hydration and nourishment.

Our two doctors, the CEO and the Director of Nursing of the home were all very supportive of her right to choose.

They promised her they respected her wishes and they would do all they could in their power to see she did not suffer.

My wife and I shared that deliberation for the last two months of 2019, which allowed us to reflect but also to get on with our lives. Being a well-organised person, she used the time to work through her work files and personal files and to nominate some personal items to be left to family and friends.

Being in a caring position, she also arranged for our various offspring to come in to see her and explain to them what she intended.

She decided to cease her dependence on the PEG feed on 2 February 2020. She remained alert, communicating with me, our families and the nursing staff. She continued doing the crossword (me with the pen), was fiercely interested family, friends, world affairs and politics, until about 36 hours before she died.

At that stage, she slowed down her communication, but we were aware that she was conscious of our presence until “I don’t when?”

Our doctors were as good as their word and she didn’t suffer apart from dryness of her mouth, eased by me and the nurses giving her ice at times.

My precious wife died at 10.35pm on 10 February 2020, quietly and without any obvious distress.

She had a very sharp mind and was a totally in control of her mental capacities until shortly before she died. Although she suffered for 1000 days in that manner, she never lost her positive determination and she never lost her sense of humour.