Founded in 1974, Dying With Dignity Victoria Inc. (DWDV), formerly the Voluntary Euthanasia Society of Victoria Inc., was originally established as a law reform and education organisation to pursue public policies and laws in the state of Victoria which enhance self-determination and dignity at the end-of-life. DWDV operates as a membership-based not-for-profit organisation, relying on the strength of our membership to support our efforts.

Over the past 45 years, Dying with Dignity Victoria’s primary purpose was to advocate for the introduction of end-of-life choices legislative reform in the state of Victoria. Significant efforts over the past three years by DWDV has contributed to the realisation of this reform.

These two Acts provide a strong foundation for ensuring all Victorians have good access to end-of-life choices into the future.

Going forward, DWDV will now focus on provision of education and services related to end-of-life care.

Helga Kuhse (DWDV) persuades Health Minister David White to establish a Parliamentary Committee of Inquiry into Dying with Dignity. This Inquiry rejected the ‘right to die’ but did recommend formally legalising the common law right to refuse treatment. This Inquiry led directly to the Victorian Medical Treatment Act, establishing the right to refuse treatment and the right to appoint a Medical Enduring Power of Attorney. The Act also included the statement that the Parliament believed “it was desirable that dying patients receive maximum relief of pain and suffering”.

DWDV developed, with the assistance of Prof. David Kelly (former Chair of the Victorian Law Reform Commission), model legislation for both voluntary euthanasia and physician assisted suicide. This model was used by Marshall Perron (Chief Minister of NT) as the basis for his Rights of the Terminally Ill Act (ROTI).

DWDV President Dr. Rodney Syme advised Marshall Perron on medical aspects of the campaign to legislate ROTI, and Kuhse and Syme gave evidence at the NT Parliamentary Inquiry into ROTI, which was passed in 1995.

DWDV organizes the ‘Melbourne Seven’ – seven doctors who wrote to the Victorian Premier stating that they had helped their patients to die, and urging him to change the law.

DWDV President Dr. Rodney Syme reports three deaths to the Coroner – in each case, death was hastened by terminal sedation. Two were cancer patients, one had multiple sclerosis, and all refused medical treatment, in particular food and fluids. The Coroner took four years to decide that the deaths were not outside acceptable medical care.

DWDV organized and supported Philip Nitschke’s election campaign as an independent in Menzies electorate, standing against Kevin Andrews. The candidate obtained a remarkable 10% of the vote.

DWDV, through the efforts of its Secretary, has a review of the Medical Treatment Act adopted as Labor policy. This was later revoked without explanation.

DWDV alerts the Health Department to deficiencies in, and abuses of, the Medical Treatment Act, resulting in a major campaign to educate the public and health professionals about the Act.

DWDV counsels and supports the family of BWV, a woman with dementia in a persistent vegetative state, whose life is maintained by tube feeding against her wishes. This leads to a Supreme Court decision that such tube feeding is medical treatment (not palliative care) that can be refused.

DWDV counsels and supports a member in her application for the appointment of a guardian for her 95 year old aunt who is being kept alive with end stage dementia by tube feeding.

Dr. Rodney Syme counsels Steve Guest, a man with terminal cancer, giving him advice that gives him control over the end of his life. After two weeks of public advocacy Steve Guest takes his own life.

DWDV held a public rally on the steps of Parliament House on June 22nd, to remember Steve Guest.

In a February Newspoll, 80% of those polled supported DWD and 14% opposed.

A June rally on the steps of Parliament House remembers the 3rd anniversary of Steve Guest’s death.

Dr Francis Macnab of St. Michael’s Collins Street Church publicly supported DWDV on the steps of Parliament House at the third Steve Guest Day on April 19th, as did the State Secretary of the Australian Nursing Federation and former Senator, Lyn Allison.

In May the Dying with Dignity Bill 2009 was introduced into the Tasmanian House of Assembly as a Private Members Bill by the leader of the Tasmanian Greens.

On April 15th the DWDV Facebook page was founded.

In October Victoria hosted the 13th Biennial World Federation of Right to Die Societies Conference, which included representatives from 12 countries and 37 organisations. A new Australian umbrella organisation, Your Last Right, was launched at the conference, funded from the estate of Clem Jones, former DWD member and Lord Mayor of Brisbane.

The ABC’s Background Briefing, discussed “A Dignified Death: Who Decides How We Die?” in a story by Di Martin on June 12th .

In September a National Framework for Advanced Care Directives was launched by the Australian Health Ministers’ Advisory Council, whose aim is to “describe the goals for which policy and practice should aim rather than reflecting current law and practice across Australia”.

In November the online The Conversation ran an eight-part series, “Talking about Death and Dying” which included references to Dr Rodney Syme, Vice President of Dying With Dignity Victoria.

The World Federation of Right to Die Societies, with representatives from 40 countries, met in Zurich in June.

The Age, on April 2nd, ran a feature story on Beverly Broadbent, whose death on February 11th was the result of her own decision. The online version of the article included a Question and Answer session with Dr Rodney Syme.

A Fairfax poll of one thousand Victorians showed 76% support for a change to the laws against assisted suicide and euthanasia.

In May Dr Rodney Syme publicly declared that he had provided Nembutal to Steve Guest, and said that if the police charge him, the issue of assisted suicide would be forced into the courts.

Peter Short, himself diagnosed with incurable oesophageal cancer, emerged as a major campaigner for the legal right to choose how one may end one's life. Peter joins with documentary film producer Jeremy Ervine to create a feature length film, "Fading to Black", about the last months of Peter's life. DWDV provides seed funding for this project and members contribute further to this investment. 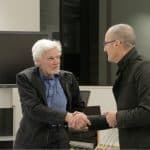 On 24th June 2014, the Senate referred the exposure draft of the Medical Services (Dying with Dignity) Bill 2014, with particular reference to the rights of terminally ill people to seek assistance in ending their lives, and an appropriate framework and safeguards with which to do so, to the Senate Legal and Constitutional Affairs Legislation Committee for inquiry and report. The Bill was introduced by Greens Senator Richard di Natale. Submissions closed on November 10th.

In September, at the 18th World Federation of the Right to Die Societies in Chicago, Dr Rodney Syme, DWDV Vice-President, won the Health Professional Award for the healthcare professional who has set a helpful precedent for the international right-to-die movement.

In mid-November The Age ran a week-long series on “the right of terminally ill people to choose, under rigorously regulated circumstances, the timing and manner of their death”, and urged Federal Parliament to pass Senator di Natale’s Bill.
(With thanks to Ron Tandberg and The Age for the cartoon) 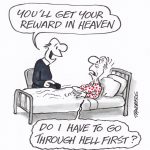 Parliament voted to establish an inquiry into end-of-life issues to be held by the Legal & Social Issues subcommittee of the Legislative Council. Over 1,000 submissions were received and some hundreds of people provided evidence at open hearings.

On 29 November 2017, Victoria became the first Australian state to pass legislation allowing voluntary assisted dying. The framework intended to balance a humane and compassionate choice for people facing death with stringent safeguards and rigorous oversight, and placed it within the continuum of end of life care, including palliative care. The 18-month implementation period meant that the law would come into effect on 19 June 2019.

The Medical Treatment Planning and Decisions Act which passed in the Victorian Parliament in 2016 came into force on 12 March 2018. For the first time this gave legislative standing to Advance Care Directives. In February 2018 the Health Minister set up the Implementation Task Force to prepare for the introduction of the practical aspects of the VAD Act in 2019.

The ALP victory in the election of November 2018 removed any doubt about implementation of the VAD legislation. Two statewide VAD Navigator positions were created, and much information placed on the web. Training for doctors was devised, and a 3-day VAD implementation conference was held. Implementation of the VAD Act on 19 June was followed by the first assisted death on 15 July.  On 19 December assent was given for VAD in Western Australia.

The assumed difficulties created by the VAD Act were realised in the delays to get approval, difficulties in finding doctors, a misleading residency requirement, and lack of trained doctors, particularly specialists. The presence of the Federal ‘Carriage Act’, preventing use of Telehealth, added to the workload of those doctors involved. Nevertheless, VAD Review Board reports noted only a few trivial cases on non-compliance.

Tasmania legislation was passed in March, followed by South Australia in June and Queensland in September. From July the West Australian Act was implemented. The Crimes Act amendment re Telehealth continues to be an impediment in all cases.