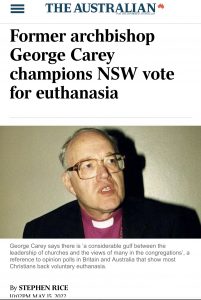 Former Archbishop of Canterbury and now Member of the House of Lords, George Carey, has incredibly written to every MP in NSWs Upper House, urging them to vote for the NSW Voluntary Assisted Dying Bill.

He has stated that opposition to the bill, that would result in aged care residents, living in homes run by Catholic and Anglican bodies, being denied VAD as an end-of-life option, would be “cruel, monstrous, unethical and un-Christian.”

Amazing VAD advocacy from an individual of faith who, prior to 2014, was opposed to VAD.