Dying with Dignity Victoria encourages everyone to complete an Advance Care Directive, providing information and several resources to assist people to do so.

In this process, there are two important additional considerations – making sure your wishes or instructions in the ACD are specific and clear and also ensuring there is clear commitment from your family members and medical practitioner(s) that your wishes will be respected and carried out.

Dr. Rodney Syme describes one case where those wishes were not followed: 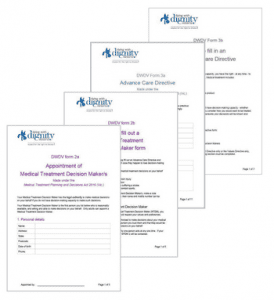 “A woman was diagnosed with terminal lung cancer which had spread to liver and bone. Her specialist in NSW referred her to ACT Calvary for terminal palliative care where she was admitted with an ACD, which was acknowledged but effectively ignored. Despite suffering from both respiratory and liver failure, she was not given terminal sedation until the day of her death, and died in conscious agony. Her daughter is making complaint to ACT Health minister and complaints commissioner.“

In contrast, an article in the Medical Journal of Australia, by Peter Eastman et. al. describes a different outcome.

This article is a case study about a situation where doctors managing a man with severe dementia respected his advance directive which specified that when he lost competence and the ability to feed himself he did not want to be artificially fed, even if he appeared to be willing to take the food.

The patient’s directive was very specifically and clearly stated. He said that if he was “in advanced stages of Alzheimer’s disease or other incurable, advanced dementing disease and if my appointed health care agent concludes after consultation with my primary health care provider that I am unable to make informed decisions about my health care, and I am unable to feed myself, continuing life would have no value for me”

The AD also provided in that situation all life-prolonging therapies should be withdrawn, including “the provision of nutrition and hydration whether provided artificially or medically or by hand or by assisted feeding.” The AD continued: “if I am suffering from advanced dementia and appear willing to accept food and fluid by hand offered by assisted or hand feeding, my instructions are that I do NOT want to be fed by hand even if I appear to cooperate in being fed by opening my mouth.”

One of the complexities of this particular case involved the issue of palliative care in relation to Advance Care Directives, based on the Medical Treatment Planning and Decisions Act 2016 (Vic), which came into effect in Victoria in March 2018.

As the writers point out:

However, in this patient’s case, “although the directives were not legally binding, the health care team felt that the ACD, along with his wife’s input, was the best guide to appropriate care provision, particularly when it became increasingly likely that he would not regain his previous cognitive abilities. Ultimately, regardless of the instructional or values-based designation of his written instructions, there was uniform agreement that he could not have made his wishes any clearer, and accordingly this was respected.”

The case study also highlights some important legal and ethical considerations related to advance care planning, with important lessons for patients writing ACDs and for their health care providers:

PrevPreviousIn Victoria 400 people have registered for VAD, despite obstacles
NextImplications of the Federal Carriage Service Act for VAD in AustraliaNext