NSW VAD Bill makes history as it passes in the Lower House. 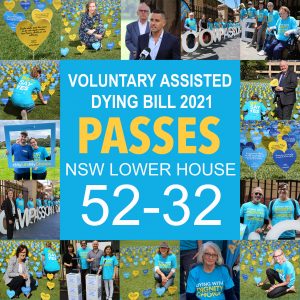 Great news from NSW where the VAD 2021 Bill was voted through the Lower House, 52 to 32 votes. This is the first time VAD Legislation has passed through either house of the NSW Parliament.

Dying with Dignity NSW President Penny Hackett said “We congratulate members of the Legislative Assembly who have acted in good faith and respectfully worked their way through what has been a challenging and emotional debate.”

After fifty years of campaigning for this law reform, our supporters can see a light at the end of the tunnel and can now picture a time, in the not too distant future, when terminally ill people in NSW will have the same, compassionate, end-of-life choices as other Australians.”